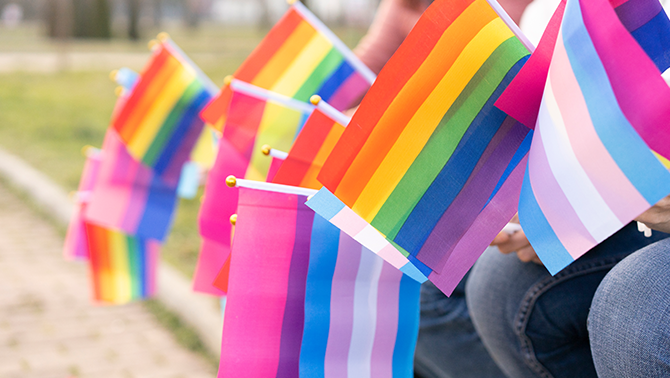 The fight for LGBTQ+ rights in the UK has been a long, long road. So much has changed, yet there is still much work to be done.

Did you know it was only in 2001 that equal age of consent came into effect in England, Scotland and Wales, and in 2009 in Northern Ireland?

It was only in 2004 that same-sex couples were legally able to enter binding, or civil, partnerships. And it took until 2013 for laws to allow same-sex marriages in England and Wales, followed by Scotland in 2014 and Northern Ireland in 2020.

Trans people were given full legal recognition of their gender in 2005 under new legislation, meaning they could acquire a new birth certificate. The downside? Gender options are still 'male' and 'female'. Non-binary people still have no path to legal recognition in the UK. On 23 May 2022, Parliament debated a petition calling for a non-binary option to be included, which has been criticised by campaigners for its transphobic tropes and fear mongering, instead of focusing on gender recognition.

In the workplace, in 2010, the Equality Act gave LGBT employees protections from discrimination, harassment and victimisation at work.

And what of passports? Gender-neutral passports are currently still unavailable in the UK. Campaigner Christie Elan-Cane has been trying to get a passport with 'X' instead of 'M' or 'F' since 1995, and in December 2021 was rejected by the UK's Supreme Court.

What does this mean for corporate travel? It reminds us that the fight for protection and empowerment of LGBTQ+ people is far from over, and that even with all of these landmark decisions and policies, there are still efforts to isolate and discriminate against the LGBTQ+ population.

So what’s next for LGBTQ+ business travel?

LGBTQ+ citizens around the world are still nervous about travel, despite an urge to do so. It is vital for the success and inclusivity of corporate travel programmes to include LGBTQ+ views and concerns in business travel policies and procedures. Consider starting an employee resources group, surveying employees anonymously, or appointing a head of DEI to focus a lens on LGBTQ+ needs. To make a change, we’ll all need to work together.